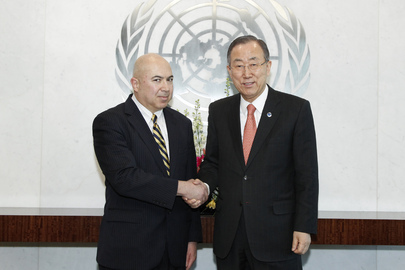 New proposal paves way for Exit of pension fund from UN at a time of outsourcing of investment – Act Now to protect our fund!

On 17 July, the board of the UN Joint Staff Pension Fund, meeting in Vienna, will be asked to consider new financial rules that set the path for the removal of the Fund from the UN at a time of outsourcing to banks and hedge funds. The proposed rules were published on 9 July, leaving the board insufficient time to properly consider a decision of such magnitude.

This comes as the pension fund CEO, Sergio Arvizu, has obtained new flexibilities in how he manages his staff, giving him space to favour those who turn a blind eye to internal rules and procedures and retaliate against those who don’t, thus further removing the fund from the UN.

Meanwhile newly retiring staff continue to wait months for their first pension and serious allegations made against the CEO by his own staff await a full OIOS investigation (reported in the press: http://www.ai-cio.com/channel/regulation,-legal/un-pension-accused-of–massive-fraud-/ and http://www.innercitypress.com/unpf3newcontroversyicp032915.html).

Up to now our fund of 250 staff has operated effectively and conservatively under the UN financial regulations. If the new rules are approved, it will become difficult to prevent further outsourcing of investments. Our $50 billion in assets at the Fund would generate tens of millions of dollars in fees for banks and hedge funds – money that should be going to us, the staff. In doing so, our fund risks joining the many other public sector pension funds that lost money in Wall Street.

It is important that the 33 members of the board, entrusted with our money, listen to us. Twice the CEO has tried to increase his powers in the Fund, and to push for greater autonomy, twice you the staff have campaigned to block him. Now he is trying again with a series of measures whose cumulative effect will be damaging to the fund. We need to stand firm and defend our interests and our future.

We hope you will join our campaign to save our fund. Please sign this petition (https://secure.avaaz.org/en/petition/The_Board_of_the_UN_Pension_Fund_and_SecretaryGeneral_Ban_Kimoon_Save_our_pension_fund/?cRtCggb). It is backed by the federations of staff unions of the UN Secretariat, funds and programmes, and specialized agencies.

The petition calls on the Board and the Secretary-General to:

Under the tagline “securing the fund’s future” the CEO is proposing financial rules for the Fund, to replace the UN’s financial regulations under which the Fund, a UN entity (although serving a number of agencies), currently operates. This is third attempt by the Fund’s leadership for reach for greater autonomy.

The new rules, drafted at the initiative of the CEO who requested the Board to request him to do so, minimize reference to the UN financial regulations (https://www.ccisua.org/wp-content/uploads/2016/07/N1340857.pdf) and treat the Fund as an quasi-independent entity at a time that it is outsourcing the investment of our assets to banks and hedge funds. The few references to UN financial  regulations are for occasions where the UN are asked to act as a service provider.

This needs to be further placed in the context of the Fund’s current underperformance, revealed in this analyis (https://www.ccisua.org/wp-content/uploads/2016/07/Analysis-Pension-Fund-Assets-Management-And-Performance-July-2016-Document.pdf) which shows:

The CEO has justified replacing the UN regulations with his own proposed financial rules as necessary for a fund that pays out $2 billion of pensions a year. However, the UN regulations that the CEO wants to replace, allow the UN itself to pay out over $5 billion a year in salaries and procurement. Further, the strong checks and balances in the UN regulations have helped the Fund avoid problems seen in other pension funds such as misappropriation, outsourcing of investment to banks and hedge funds, and exploding administrative costs, and have shown themselves fit for purpose.

The CEO has been keen to point to the comprehensive nature of the financial rules that he has been promoting. We do not dispute that they are comprehensive. However, it is their comprehensive nature that will establish the Fund as a quasi-independent entity. We believe that if the Fund has requirements that are not well served by the current UN financial regulations, it should request a supplement to the UN regulations. This for example is what UNEP and UN-Habitat have done. This would keep the Fund firmly within the UN while addressing its financial needs.

With regards to how the Fund carries out its investments, we are concerned by the chapter on the Fund’s investment policy. It formalizes payment of fees to discretionary investment managers e.g. banks and hedge funds who are outsourced a sum of money to invest in return for a fee. This is a worrying development for the fund, especially given that the investment policy that determines how the Fund’s assets are invested is decided by the Fund’s management in consultation but with no need to obtain the agreement of its board and investment committee. Further, the General Assembly’s influence over the investment policy is limited to setting criteria on safety, profitability, liquidity and convertibility. Therefore a provision is being made to formalize outsourcing investment with no controls by the Fund’s governing bodies to prevent it.

To make matters worse, the proposed rules have been presented to the board of the Fund one week before it is expected to make a decision, along with hundreds of pages of other documents. We do not believe that a decision of such magnitude should be taken by the board in such a rushed manner and without the opportunity for the board to consult with staff, who are the ultimate beneficiaries of the Fund. However, given the tight timeline, board members have been unable to do so.

This is why the staff unions ask the board to reject the proposed financial rules.

Key concerns are (with references so you can see for yourselves):

Pension payment delays remain significant despite claims to the contrary

Staff retiring from UN organizations report waiting up to six months before receiving their first pension payment, putting thousands in financial penury. This is largely due to the mismanaged implementation of a new IT system for processing and paying pension benefits, called IPAS. The problems started in May 2015, when IPAS was switched on. Without checking that IPAS worked, the old system was switched off. IPAS only started working, but partially, that September.

The Fund’s CEO has since last summer refused to acknowledge the severity of the problem nor propose adequate steps to deal with it. He has variously blamed other organizations and his own staff for the delays, without taking any responsibility for the suffering of retirees. He also ignored advice that could have prevented the crisis in the first place.

The Fund’s board chairman, Olusoji Adeniyi, has denied the severity of the problem. In February 2016 he informed staff unions, who had asked the board to convene an extraordinary meeting, that:

“the bulk of the backlog will be practically eliminated by early June. The Fund will be returning shortly thereafter to processing times of between one and two months after receipt of all separation documentation and payment instructions and provided there are no documentation discrepancies… an extraordinary meeting of the Pension Board would be unnecessary and counterproductive.”

Despite this promise and despite performance targets set by the UN to reduce the backlog completely by the end of May, the ongoing backlog still remains significant. Further, checks show that when the Fund provided the UN and PWC with data to claim that the backlog, as it stood at 1 March, had been eliminated, that data omitted over 400 cases from 2015. Staff union forecasts, which the Fund has acknowledged as correct, show the backlog being eliminated by end 2016.

In 2014 we campaigned to block new staff rules for the Fund that would have separated it from the UN. Last year we campaigned, again successfully, to block a memorandum of understanding with the UN that would have achieved the same thing. At the time, the Secretary-General’s chief of staff, Susana Malcorra promised that no changes would take place without consultation the staff unions. Yet in April this year the UN Assistant Secretary-General for Human Resources Management issued this memo (https://www.ccisua.org/wp-content/uploads/2016/07/OHRMASGMemo.pdf), which goes well beyond the proposed flexibilities that were successfully blocked last year and effectively creates a new human resources policy at the Fund.

Given the Fund CEO’s practice of using flexibilities to favour staff with whom he either has a close relationship or who are willing turn a blind eye to internal rules and procedures, we believe that the following flexibilities, which are not limited in time and yet are banned within the UN, will discourage Fund staff, who are UN staff, from standing firm on the rules that protect our money, will lead to principled staff being sidelined, will create a department managed on the basis of favouritism, and exacerbate an existing culture of fear.

It should be noted that the mismanaged implementation of the new IPAS pension system relates in part to the CEO’s lack of communication with his middle managers, his ignoring the suggestions of experts within the Fund and fear of his staff to point out errors.

UN management has informed us that its intention is for the memo to be limited in time. However, there is no stated expiry date. And even its temporary application has permanent and damaging consequences. This is why the staff unions ask the Secretary-General to rescind the memo.

Features of concern in the memo are:

No OIOS investigation to-date into allegations against the CEO.

In April 2015, serious allegations were made against the CEO by his own staff on how he had been managing the Fund. These were reported in the press: http://www.ai-cio.com/channel/regulation,-legal/un-pension-accused-of–massive-fraud-/ and http://www.innercitypress.com/unpf3newcontroversyicp032915.html. Despite requesting an investigation from OIOS, this has not been forthcoming. Instead, OIOS has only conducted a procedural audit, which omits the interviewing of witnesses required to get to the bottom of the allegations. It should be noted that an OIOS official who used to audit the Fund was recently selected for a D-1 position at the Fund, a conflict of interest that was never reported.

CCISUA General Assembly to be held next week

CCISUA mid-term meeting to be held next month