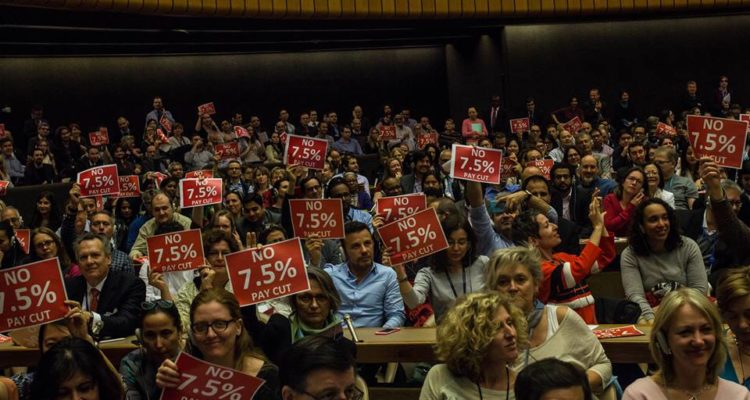 Those employed at the United Nations in Geneva are worried their salaries could be cut.

Alessandra Vellucci, a spokesperson for United Nations in Geneva, said she is still waiting for precise numbers. “At the moment we don’t know the size of the reduction,” while adding that the cut would only affect the portion of salary linked to cost of living.

Such adjustments are made regularly at the organisation, which periodically surveys the cost of living in the different locations around the world where it operates.

The strong Swiss franc has helped to deliver deflation in five of the last 6 years. Over time cumulative deflation boosts real salaries, something especially noticeable when buying imported goods and services. Data published in March show overall Swiss price deflation of 2.8% since March 20111. Add to this the boost the strong franc has delivered to spending power abroad and it is clear that Swiss franc salary earners have received a material jump in real salary over the last few years.

“The situation in New York should be resolved with a salary increase for their staff and not by salary reductions for employees in Geneva” stated the main staff union at the UN in Geneva in an internal memo obtained by RTS.

Ian Richards, head of the staff union told RTS that he thinks the planned pay cuts don’t reflect the evolution of Geneva’s economy.

Staff got together last week to protest against the cuts. Some plan to go on strike.

According to RTS, the pay cut which is expected to progressively come into effect from August, would affect 5,400 international functionaries living in the greater Geneva region. Their spending is estimated at CHF 2.6 billion a year.
1 CPI March 2011 = 100.7, CPI March 2017 = 97.9 (Base December 2010 = 100) – figures from Swiss Federal Statistical Office