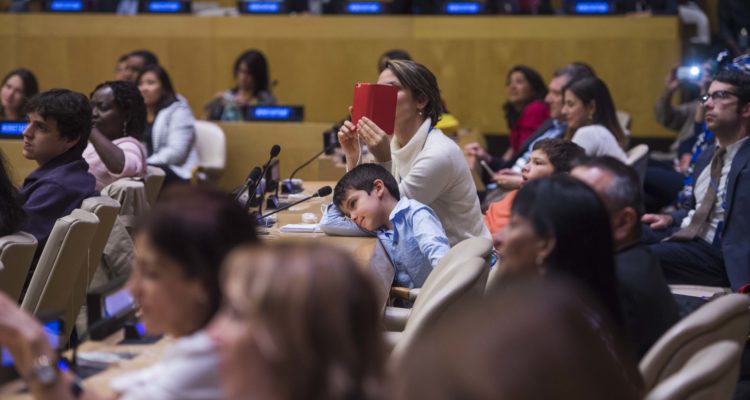 Julia Roetzel’s first pregnancy with her daughter, now nine months old, was unexpected. Equally surprising to Roetzel, 36, was how difficult it was returning to her job at the United Nations Office for Project Services when her baby was almost four months old.

“I had no idea the amount of stress you go through if you are trying to pump and work and then pump and work. And you go home and are there for the baby again. To me, it is not doable, at least without costs on your mental health,” Roetzel said. “I really thought I could go back after such a short time, but it did bother me way beyond what I could imagine.”

Roetzel left her Copenhagen position in human resources and organizational development in January. She says she is now happy to be at home, temporarily unemployed, in her native Germany with her family.

Almost all countries — save the United States and Papua New Guinea — have some form of maternity leave, widely considered beneficial for the health and economic prosperity of families.

Yet as some major employers and tech companies in the U.S., from Facebook to Twitter, have recently rolled out expanded and new family leave programs that emphasize equality, various U.N. staff coalitions and individual employees are questioning the organization’s approach to maternity and paternity leave, saying it is not long enough, and discriminates in various different ways by gender.

“Family leave policies are perpetuating, even strengthening, the same gender norms and inequalities we claim to be working against.”

U.N. female employees who give birth, like Roetzel, can take the U.N.’s standard 16 weeks of paid time off. Mothers must take two of these weeks before the expected birth of their baby — a requirement that can become complicated in the case of Sarah Douglas, a gender advisor for the U.N. peacebuilding support office. Her son, Adam, was born two weeks after his due date in November 2014, so she sat home for a month, waiting, as the time cut into her maternity leave.

Biological fathers, meanwhile, typically receive just one month, or two if they are posted at a hardship station. New parents of adopted children also generally receive two months. U.N. workers who are hired as consultants — making up about 30 percent of the entire U.N. workforce — do not receive any of these benefits. It isn’t clear how many of these workers are female or male.

But now a steady push for reform of these rules — grounded on the basis of discrimination — may be gaining speed with a new and like-minded U.N. secretary-general who is prioritizing gender parity.

“Gender equality is one big topic at the U.N, and there are a lot of programs on how to improve gender equality. We have HR policies that say they [U.N. agencies] are committed to working for gender equality,” said one female U.N. staffer in Geneva, who asked to remain anonymous because of the sensitive nature of the discussion. “But at the same time, the family leave policies are perpetuating, even strengthening, the same gender norms and inequalities we claim to be working against — men are the breadwinners and women are the caregivers.”

There are already some exceptions to the standard rules: UNICEF and the World Health Organization both allow for an additional eight weeks of paid, special leave for mothers, as of 2014. The WHO recommends exclusive breastfeeding until a baby is six months — a contradiction many have noted in the U.N.’s standard four-month maternity policy.

A recently leaked report on system-wide gender parity by the office of Secretary-General António Guterres calls for one parental leave policy that is “equal in length.” All maternity leave policies would be supplemented by an additional eight weeks, as well, keeping in line with the WHO’s breast feeding recommendation. The draft strategy — expected to be released by the end of this month — also details specific hiring targets, practices and consequences that would help achieve system-wide parity before 2030. While women make up about 63 percent of entry level U.N. jobs, they hold just 27 percent of top “UG” U.N. positions.

“Inclusivity and equality will not be attainable without a working environment that prizes diversity and flexibility, provides equal opportunities and recognizes that staff are also family and community members,” reads the document, the result of a gender-parity task force that Guterres launched in January, and has met over this winter and early spring.

Up until now, attempts to reform family leave by U.N. staff groups have basically fallen flat. U.N. Globe, a collective that works against the discrimination of LGBTI U.N. employees, issued proposals to give parents equal time off and make the policy gender neutral in July 2015. They also met with some H.R. staff of various U.N. agencies, to a “skeptical, if not negative,” reception, says Hyung Hak “Alfonso” Nam.

“It was more along the lines of, ‘this would be very difficult to get done.’ I would say the response now is, ‘let’s explore this,’” he explained. “There is a willingness to roll up the sleeves and look into this issue, and I would say for a bureaucracy like the U.N., this is an achievement.”

So far, UNOPS, a self-financed agency, and the rest of the U.N. agencies, save UNICEF and the WHO, have not expanded their leave policies.

The 15-member International Civil Service Commission ultimately is responsible for determining the U.N.’s parental leave policy, before the General Assembly’s administrative Fifth Committee approves their plan. The hope is that Guterres’ strategy, which incorporates many of the U.N. Globe and the U.N. staff union’s recommendations, will pass through the ICSC.

The ICSC and Guterres’ office did not respond to a request for comment on present and potential plans for reforming parental leave.

Many U.N. agencies are not equipped to financially accommodate a staff member taking parental leave, says Ian Richards, president for the Coordinating Committee for International Staff Unions and Associations. While some offices or agencies have funds to hire temporary replacement employees, in other cases, a post can stay empty for a while.

“Some put money aside, others don’t. There’s no hard and fast rule,” he said.

The staff union, representing more than 40,000 U.N. staffers, presented a paper to U.N. agencies last week on careers of women, also proposing that maternity and paternity leave be harmonized under one, equal policy. The paper also recommends allowing pregnant women to continue working as long as they see fit, given a doctor’s sign-off, as well as a plan for children born to surrogate mothers.

A senior U.N. agency staffer and advocate on women’s rights and parental leave cautioned against centering the discussion in money.

“There is a willingness to roll up the sleeves and look into this issue, and I would say for a bureaucracy like the U.N., this is an achievement.”

“The problem with knowing the cost is it will just embroil everything in money when it is not the point,” she said, noting that there have been no studies on how much expanding parental leave, or covering the temporary absence of workers, would cost U.N. agencies. She asked to withhold her name because of discussions underway about the reform.

In the U.S., parental leave policies have been shown to pay off for employers, as they are likely to retain talented, happier employees.

In the case of Douglas, a project fund paid for a replacement when she took her maternity leave while at U.N. Women. Douglas tagged on vacation days to extend her time with her son, Adam, but still felt like she rushed back to work when she and her husband hired a nanny to care for Adam, then nearly five-months. Part of the decision was self-imposed, but there was also a work culture and reality that doesn’t offer many images of female leaders taking time off to raise families.

It’s a conversation Douglas has had with friends and co-workers through the U.N. Feminist Network, a coalition of feminist U.N. staffers, which offered suggestions to the gender parity task force.

“A lot of the people who have positions of authority [at the U.N.] are men, and women who don’t have children,” she said. “It’s hard on your career and your confidence and the environment can be tough.”