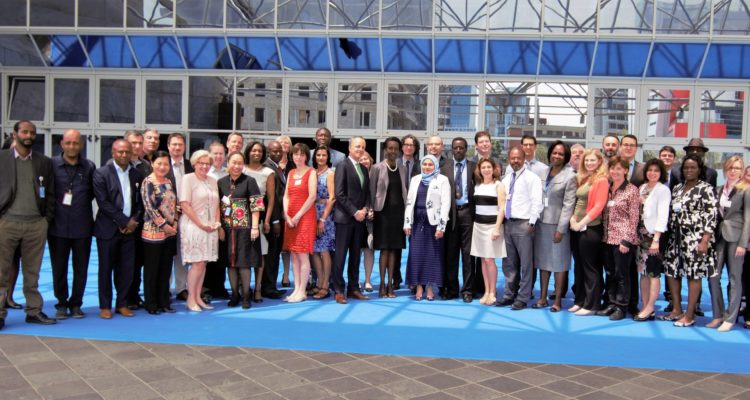 From 5 through 9 June 2017, delegates from CCISUA member Staff Unions and Associations met in Addis Ababa, Ethiopia, to discuss issues of common concern and agree on a way forward to best meet the upcoming challenges.

The General Assembly was hosted by the Economic Commission for Africa and chaired by its Staff Union President, Mr. Joseph Baricako. The ECA’s Deputy Executive Secretary, Ms. Giovanie Biha, addressed the opening remarks, emphasising that CCISUA plays a vital role in ensuring that the voice of our staff members is heard.

The GA had a full agenda and CCISUA members deliberated on developments, best practices and the way forward in a number of fronts of concern for UN staff, including:

Gender parity and flexible work arrangements – The GA agreed that efforts towards gender parity in all categories and grades as well as the right to flexible work arrangements must remain a priority. The policies to guarantee these rights have been established but lack implementation and oversight. The unions are working to raise these issues at the appropriate fora.

Pension Fund – On non-recognition of the elected candidates to represent the staff to the UN Staff Pension Committee and to the governing Board of the Pension Fund, CCISUA raised the issue with the Secretary General and sent out a petition requesting that all elected representatives be fully recognized. As a result, 4 of the 6 representatives have been now recognized. CCISUA members agreed that it is necessary to keep pushing for full recognition of the elected representatives as the Fund is in violation of Articles 5 and 6 of its own Regulations and Rules.

Review of hardship methodology – The GA discussed the need to review the classification methodology currently in use as it has led to artificially upgrading the classification rating of some duty stations whereas there was no improvement to the conditions of life and work of staff on the ground. Upon the request and insistence of CCISUA and some of the agencies, the ICSC has finally authorized a working group meeting to review the methodology. CCISUA will be represented to convey staff’s concerns as appropriate and to ensure that the difficulties of life in certain duty stations are better catered for.

Pay cuts – The GA agreed that there is lack of transparency in the outcome of the ICSC’s place-to-place survey for Geneva, as the preliminary result was around -3.5 % cut and later changed to -7.5 % cut for all professional staff. This new methodology has been used in Geneva for the first time and there is a high possibility that the ICSC will also bring down the salaries in other duty stations. The GA decided to take the outreach and mobilization of staff campaign forward in order to ensure clarification from the ICSC and to guarantee staff’s rights.

Locally recruited staff – The GA discussed the existing trend of organizations assigning similar functions and responsibilities to National Professional Officers (NPOs) and P staff. This was observed to be taking place in low wage countries only, and appeared to be aimed at paying staff from developing countries less and on a local basis. Further, being the compensation review for P-categories completed, CCISUA members expect the ICSC to begin the review for GS staff.

Partnership with UN-Globe – The GA decided to sign an agreement of cooperation with UN-Globe, which was established to represent and to attain equal rights for lesbian, gay, bisexual, trans and intersex (LGBTI) staff members of the UN system and its peacekeeping operations. This cooperation will allow CCISUA to consult with UN-Globe in order to ensure that our policies take into consideration the requirements of the LGBTI community.

Justice – Several CCISUA members expressed concern that cases related to benefits are mostly related to lack of information provided by local HR departments. Further, the members agreed that there is lack of implementation of disciplinary measures for managers who have been found guilty. The GA decided to work towards informing the staff on justice mechanisms.

Harassment / Whistleblower Protection – Several CCISUA members pointed out that it is not clear which unit / department is exercising the protection and that this increases the culture of fear to denounce misconduct. The members agreed that it is necessary to push for an improvement of the policies and to ensure that the mechanism is up to standard, and that disciplinary measures are implemented.

Mobility – A number of issues related to mobility have been raised by the delegates and the GA decided that there is a need to find a common ground across all the offices / organizations, in order to see what are the common issues and how to address them.

Safety and security – As pointed out by some CCISUA members, UN Staff are put at risk due to the abolishment of the compliance methodology. According to the previous system, all field mission heads had to ensure to be fully compliant with the methodology, whereas under the current system staff movements are no longer tracked. The GA agreed to establish a security working group to address the discussed issues.

Administrative off-shoring – The delegates shared their experience with UMOJA deciding that it should be identified which functions need to be decentralized / centralized. This should be accomplished through a study with statistics, identifying how the savings are calculated and whether there is a real benefit.

The report of the GA is expected to be available within two weeks.