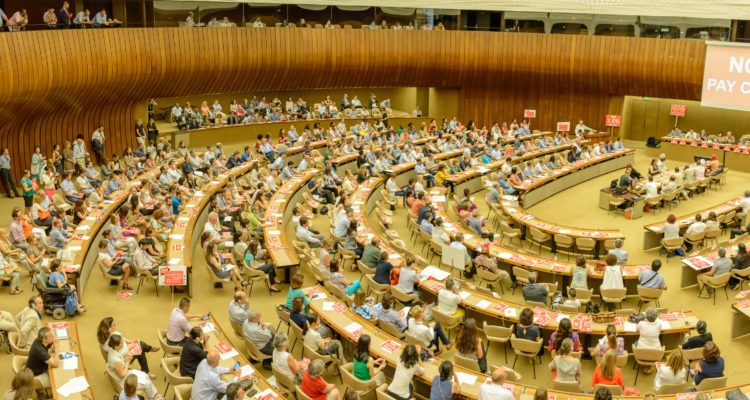 On Friday, June 16, international organizations in Geneva came to a halt for two hours to protest the decision of the International Civil Service Commission to impose an almost immediate 7.7 percent pay cut.

A number of high-level meetings were suspended, including the Human Rights Council. However, staff unions asked that for humanitarian reasons, the Syria talks should continue to be serviced.

During the work stoppage, a large number of staff convened in the Palais des Nations for an information meeting. The meeting was raucous with table thumping and chants of “no pay cut”. Attendees included directors and human resources personnel, as well as a delegation from the International Labour Conference and French trade union.

During the meeting, staff were updated on the situation and informed about the next steps.

The background to the pay dispute lies in a decision of the ICSC to cut pay by a month a year on the basis of a cost-of-living survey.

The ICSC’s decision, made in late March in New York, would require the pay cut to be implemented in May for newly arriving staff in Geneva, and from August for existing staff.

A series of staff meetings and rallies, at which inconsistencies were pointed out in the ICSC data, led many executive heads of agencies, but not that of the UN, to refuse to implement the cut until such time as they could get satisfactory answers to the concerns raised by staff. However, after two meetings with the ICSC, they remained unconvinced.

Further, the refusal of the ICSC three times to meet with Geneva staff, led to claims of the ICSC being unsure of its own figures.

Under pressure, the ICSC accepted to receive a team of statisticians from UNCTAD, the ILO and IMF to examine their data.

The stoppage and concerns of staff received significant media coverage. It is hoped that this will ensure that the ICSC and UN management understand the strength of feeling in Geneva.

The next step is the ICSC meeting in Vienna next month, where the issue is on the agenda for possible reconsideration. Both staff unions and the management teams of agencies are seeking dialogue with the ICSC to see how their original decision may be reconsidered on the basis of the calculation errors and significant unrest.

On the last day of the ILC, UN staff based in Geneva embarked on a work stoppage against 7,5% pay cut | Public Services International