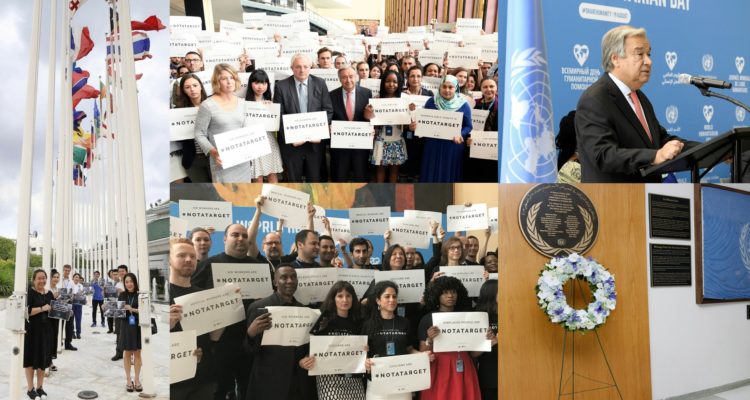 Every year on 19 August, World Humanitarian Day is celebrated to pay tribute to aid workers who risk their lives in humanitarian service, and to rally support for people affected by crises worldwide.

This year, we stand together with the millions of people caught in armed conflict to advocate for those most vulnerable in war zones, and reaffirm that civilians are #NotATarget. Read staff unions’ statement on World Humanitarian Day here.

As part of the campaign, events are organized around the world to bring together UN staff, the public, influencers, partners, Member States and the humanitarian community to express our solidarity with civilians caught in conflict, and call for global action to ensure their protection. Secretary-General António Guterres joined UN staff to symbolically “stand together” with those affected by armed conflict. Secretary-General Guterres recalled his work with the UNHCR, one of the central UN humanitarian agencies, saying that throughout the years he saw more and more civilians and humanitarians being targeted, and the protections of civilians becoming more and more difficult to implement. “We must make every effort to protect the lives and dignity of civilians caught in conflict. For the millions of people struggling to find food, water, and safe shelter; who have been driven from their homes with little hope of return; whose schools have been bombed; and who await life-saving medical care, we cannot afford to fail”, the Secretary-General said, referencing the #NotATarget campaign.

The campaign’s petition, which can be signed at worldhumanitarianday.org, demands that world leaders do more to protect people trapped in conflicts. The petition will be presented to the Secretary-General during the 72nd General Assembly, which opens on 12 September this year.

Let us stand up for aid workers (Opinion) | Daily Nation

In the line of fire (Opinion) | Thomson Reuters Foundation