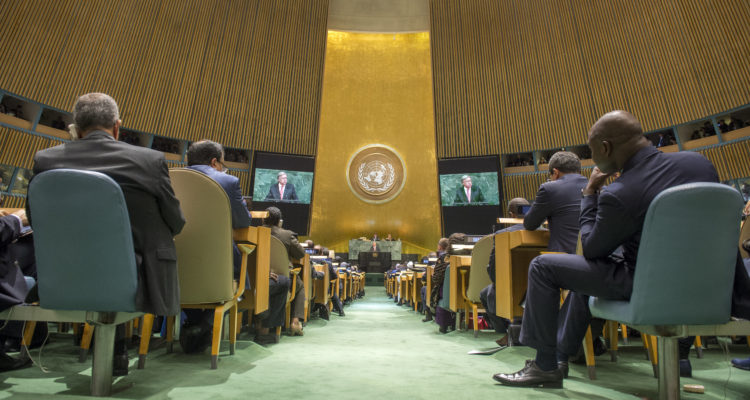 The UN Joint Staff Pension Fund is seeking candidates with “more than 20 years of proven progressively responsible experience” to replace Carolyn Boykin, the former chief investment officer of the Maryland State Retirement and Pension System, who took the UN post three years ago, according to an internal job posting seen by Bloomberg News.

Whoever replaces Boykin won’t be taking a typical investment post. The UN fund is among the world’s most complex, with more than 128,000 participants and 72,000 retirees in nearly 200 countries. Its payments go out in 15 currencies, including dollars, euros, kroners and rupees.

While the fund is up about 12 percent this year through August — in line with the S&P 500’s return — to a record $61 billion, that gain from the “Trump bump” in markets has come too late. At the famously byzantine UN, the posting of Boykin’s job is an unusual sign of disapproval from Guterres, who took office in January and oversees the pension fund’s investment director.

“Officially her post was advertised, but that’s UN for firing,” said Ian Richards, a critic of Boykin who serves as president of the Coordinating Committee for International Staff Unions and Associations of the UN system, the employee labor union, which has more than 60,000 members.

Calls to Boykin’s office seeking comment were directed to the secretary-general’s office.

“She is aware that nominations for her post have been opened,” said Farhan Haq, deputy spokesman for the secretary-general. “The position was advertised widely and will be filled through a competitive evaluation process.”

Boykin isn’t the only manager who has faced criticism. Sergio Arvizu, the fund’s chief executive officer who oversees benefits and operations, came under fire after new benefits-management software installed in 2015 led to delays in making payments to beneficiaries. Thousands of new retirees, some of whom had to wait six months to receive payments, were enraged.

Matters came to a head last December, when the General Assembly passed a resolution criticizing the fund’s returns and for the delays in making payments. The resolution expressed concern that, for the 2014–2015 period, the fund had “losses” of $3.4 billion in foreign exchange transactions.

The resolution also called on the UN Office of Internal Oversight Services to conduct comprehensive audits of the fund’s policies and report on Boykin’s performance.

The subsequent audit criticized management for not developing plans on how to eliminate delays and expedite hiring for long-vacant positions. The report also urged steps to ensure that delays and “very low response” rates to emails and telephone calls from clients be addressed.

Boykin, who was previously president of Bolton Partners Investment Consulting Group, is part of a complex governance structure at the UN fund. While Boykin reports directly to Guterres, Arvizu oversees benefits and operations and reports directly to the UN General Assembly, the main body representing all 193 member countries. The investment committee includes representatives from China, Germany, Iraq, Botswana, Spain, Brazil and the U.S.

Arvizu, a former director of investments at Mexico’s Social Security Institute, has also been a target of the UN’s labor union over efforts to change management policies at the fund. In a 2015 letter to members, Arvizu said he was facing a “malicious campaign with gross misrepresentations.” The allegations triggered an internal investigation by the UN’s anti-corruption watchdog, which cleared Arvizu.

The latest General Assembly resolution also had an impact on Arvizu’s contract negotiations. He already had served one five-year term and was eligible for a second five-year term starting in 2018. But the pension board renewed his contract for three years instead.

“The consensus was for a three-year extension,” Lee Woodyear, a spokesman for Arvizu, said in a phone interview. “There were some compromises.”