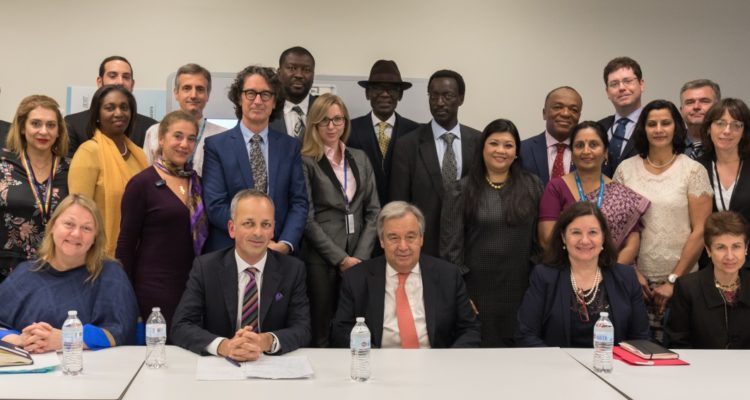 The three-day meeting also included a presentation of a donation by CCISUA to the UN memorial fund, which helps children of staff killed in the line of duty. Another highlight was the signing of a memorandum of understanding with UN-Globe to better integrate the concerns of LGBTI staff in UN decision-making.

Discussions with management resulted in a number of key takeaways for staff:

Further to this, CCISUA took the opportunity to express staff’s concerns on a number of issues.

CCISUA members met with the Chief of GSDM and enquired about possible risks for staff with administrative functions as well as career prospects for those to be recruited to offshore locations. Further, the members highlighted the importance of staff having a “say” in the decision making process, as staff will be directly affected by the outcome. CCISUA suggested that staff representatives be given an observer status in the Steering Committee. CCISUA members further stressed that, as it currently stands, the Secretariat comprises a number of administrative centres offering varying levels of price, quality and services to suit the needs of different clients, through transparent price lists. The current offshoring proposal would create a monopoly with no incentive to improve costs and standards or innovate.

During CCISUA’s meeting with the Secretary-General, the members highlighted that Resolution 65/247 (paragraph 58) “urges the Secretary-General to consider granting five-year fixed-term contracts to staff members” who qualify for continuing contracts with five years of continuous service and good performance, but who fall outside the post envelope – which  was done in part to encourage longer-term workforce planning. However, some departments failed to do so, including on regular budget funded posts, leading to a two-track system within the UN, adding additional administrative workload and creating unnecessary uncertainty for good performing staff who need to make medium-term plans.

CCISUA members met with the Executive Director of the Office of Administration of Justice and expressed staff’s concerns about a number of issues, as the exclusion of consultants from a fair and equal access to justice, the high number of staff’s cases that are turned down by OSLA and do not receive proper legal assistance, the lack of funding for lawyers working on staff’s cases (OSLA), among other. CCISUA members were assured that there is will to advocate for a funded legal support system for staff as well as that there has been a revision of policies in order to include protection for consultants.

Staff unions have long been calling for a fully diverse workplace with an enabling environment that empowers women, and prevents discrimination and sexual harassment. CCISUA discussed some of the tackling issues with the Secretary-General, the Ombudsperson, the Chief of Ethics Office and the ASG of OHRM, stressing that it is time to update the policy on preventing sexual harassment, and to promulgate a related administrative instruction on investigations and disciplinary matters, for which consultations were completed last year. CCISUA members also stressed that any HR policy must motivate hard-working women and men with promotion opportunities and that no barriers should be erected to the career progression of women or men.

Meetings were also held with the heads of the Office of Staff Legal Assistance (OSLA) and the Ethics Office as well as with the International Civil Service Commission (ICSC).