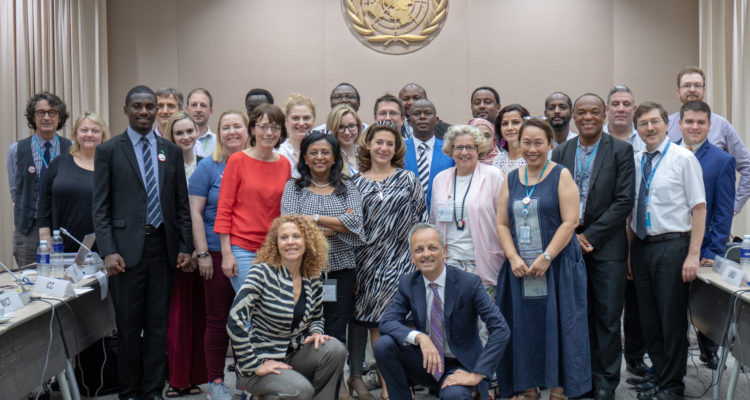 CCISUA delegates attended the federation’s 33rd General Assembly (Bangkok, 29 May-1 June), hosted this year by the Economic and Social Commission for Asia and the Pacific (ESCAP), and chaired by its Staff Council President, Ms Charuwan Tintukasiri.

In his opening remarks, ESCAP’s Deputy Executive Secretary for Programmes, Mr. Hongjoo Hahm, expressed concern about the challenges faced in meeting management reforms, which impact not only staff but also service delivery. Mr. Hahm conveyed a message from the President of ESCAP, praising CCISUA for ensuring that staffs’ voices are heard and for its work on gender parity, flexible work arrangements, recruitment and mobility. He further recalled that ESCAP is one of the agencies affected by budget cuts and thanked CCISUA for their support to its staff.

The location of CCISUA’s 33rd GA was not selected by chance: CCISUA chose Bangkok in order to show support for staff facing pay cuts in the UN common system, especially colleagues in Bangkok, who suffered a 13,4 % cut (on top of a 47 % cut) and are now confronted with the introduction of a potential, even lower, third salary scale.

Post adjustment review – the CCISUA GA highlighted the need to continue working with expert statisticians in order to ensure the highest level of participation in ICSC meetings, both on strategic and technical fronts. Cooperation with FICSA and UNISERV was welcomed by the membership as the three federations share similar concerns.

Locally recruited staff compensation review – CCISUA members shared lessons learnt and challenges faced by local salary surveys committees in respective duty stations. They agreed that the lack of training and transparency in the implementation of the methodologies needs to be addressed. The CCISUA GA called for more dialogue and knowledge-sharing between the unions, and that options for expert representation be considered. All agreed that the methodologies do not fit the particularities of the vast number of duty stations.

The growth in non-regular staff and other forms of precarious contracts – CCISUA members noted that more and more organizations are making use of affiliate work force, e.g. consultancies, and don’t offering health insurance, pension benefits, leave, etc. It was further highlighted that there is no global database for UN consultants, putting both the consultants and the UN in a vulnerable position. The CCISUA GA agreed to call for regularization of consultancy posts at the appropriate forums.

Pension fund – CCISUA members raised concerns about the fund’s management, the ongoing culture of secrecy, and the backlog of 15,000 cases. In connection with the point above, delegates cautioned that due to the growing number of consultancies and other forms of employments on vulnerable contracts, that replace regular posts, contributions to the pension fund are decreasing. The CCISUA GA agreed to take a position in support of OIOS audits and will push for the implementation of its recommendations.

Review of hardship duty station classification – CCISUA members agreed that the methodology used by the ICSC to review the duty station classification is questionable as numberous duty stations have been upgraded without there being any change in the living conditions. In many upgraded duty stations, there are considerable hardships such as a lack of educational opportunities for children, poor healthcare facilities and a lack of other, basic infrastructure. Members also raised concerns about “family duty stations” without amenities for family members. Furthermore CCISUA members stressed the need to extend the duty of care to psychosocial and medical aspects, and to not only limit ‘Duty of Care’ to hardship duty stations. It was agreed that these issues be addressed during the next ICSC session and at the HLCM task force on ‘Duty of Care’ in high risk environments.

The CCISUA GA was preceded by a training on harassment prevention, and included a town hall meeting with ESCAP staff.