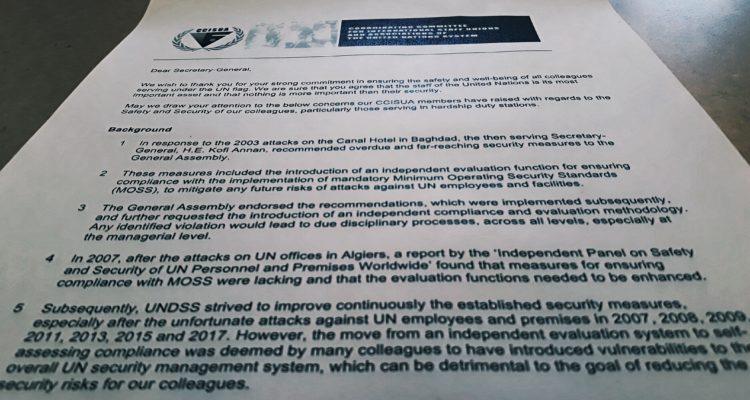 We wish to thank you for your strong commitment in ensuring the safety and well-being of all colleagues serving under the UN flag. We are sure that you agree that the staff of the United Nations is its most important asset and that nothing is more important than their security.

May we draw your attention to the below concerns our CCISUA members have raised with regards to the Safety and Security of our colleagues, particularly those serving in hardship duty stations.

1 In response to the 2003 attacks on the Canal Hotel in Baghdad, the then serving SecretaryGeneral, H.E. Kofi Annan, recommended overdue and far-reaching security measures to the General Assembly.

2 These measures included the introduction of an independent evaluation function for ensuring compliance with the implementation of mandatory Minimum Operating Security Standards (MOSS), to mitigate any future risks of attacks against UN employees and facilities.

3 The General Assembly endorsed the recommendations, which were implemented subsequently, and further requested the introduction of an independent compliance and evaluation methodology. Any identified violation would lead to due disciplinary processes, across all levels, especially at the managerial level.

4 In 2007, after the attacks on UN offices in Algiers, a report by the ‘Independent Panel on Safety and Security of UN Personnel and Premises Worldwide’ found that measures for ensuring compliance with MOSS were lacking and that the evaluation functions needed to be enhanced.

5 Subsequently, UNDSS strived to improve continuously the established security measures, especially after the unfortunate attacks against UN employees and premises in 2007, 2008, 2009, 2011, 2013, 2015 and 2017. However, the move from an independent evaluation system to selfassessing compliance was deemed by many colleagues to have introduced vulnerabilities to the overall UN security management system, which can be detrimental to the goal of reducing the security risks for our colleagues.

6 Over the past few years, staff representatives have expressed concern that the UN and its employees may be put at risk due to what we see as a potential erosion of the Security Management System through the diminishing of the capacity of the security applications that had been endorsed in 2005 by the General Assembly, in response to the Secretary-General’s report A/59/365.

7 CCISUA has repeatedly brought this to the direct attention of the USG/DSS, through formal and informal means. Our Security Advisor has informed the federation that, as a result of expressing our concerns, he has become the subject of harassment and retaliation, due to which OIOS and the Ethics Office have put him under protection in line with ST/SGB/2017/2/Rev.1

8 At its 33rd General Assembly, the CCISUA members voted unanimously on a vote of ‘no confidence’ on the current management of the Security Management System.

9 The CCISUA GA also decided not to participate in the upcoming IASMN meeting in Montreux, to show our solidarity with our colleague.

We therefore request your assistance and action in:

• Reviewing the currently established Security Risk Management Process to ensure that a strong and independent evaluation function is maintained, in addition to the current principle of selfevaluation by the Agencies, Funds and Programmes

• Conducting an independent audit of the changes to the Security Management Framework since 2014 with the aim of (a) identifying gaps against the established governance framework, (b) identifying strengths and weaknesses of the current system and (c) resolving any issues that expose UN employees and premises to an unmanageable risk

• Ensuring due process in investigating and finalising the cases related to the unacceptable treatment of our Security Advisor.

In closing, we wish to thank you for your continued efforts in ensuring the well-being of all UN employees and trust your judgment and leadership in re-establishing a functioning Safety and Security Framework and in leading the way to a transparent UN that holds its staff and management accountable.