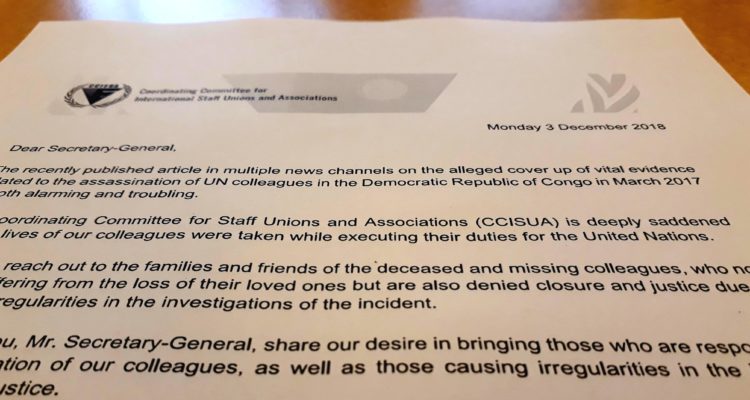 CCISUA addresses a letter to the Secretary General on the alleged cover up of vital evidence related to the assassination of UN colleagues in the Democratic Republic of Congo in March 2017.

The recently published article in multiple news channels on the alleged cover up of vital evidence related to the assassination of UN colleagues in the Democratic Republic of Congo in March 2017 is both alarming and troubling.

The Coordinating Committee for Staff Unions and Associations (CCISUA) is deeply saddened that the lives of our colleagues were taken while executing their duties for the United Nations.

Our hearts reach out to the families and friends of the deceased and missing colleagues, who not only are suffering from the loss of their loved ones but are also denied closure and justice due to the alleged irregularities in the investigations of the incident.

We hope that you, Mr. Secretary-General, share our desire in bringing those who are responsible for the assassination of our colleagues, as well as those causing irregularities in the internal investigations, to justice.

We thank the journalists and external investigators for their tireless and dedicated efforts in uncovering the circumstances and political motivations that have led to the deaths of our colleagues. They have clearly highlighted the failings of our internal investigative mechanisms, which have been unable to deliver a thorough and truthful analysis of the incident.

CCISUA can only hope that you, in your capacity as the highest-level official of the United Nations, will do your utmost to serve justice by conducting a proper independent analysis of the incidents in the DRC of March 2017, liaising with the Government of the DRC to bring the assassins and those who gave the orders, to justice, taking action in case of substantiated misconduct in the alleged cover-up of vital information, deliberately withheld for purposes other than identifying the real culprits of the gruesome assassination of our colleagues.

We also request that the report by the Board of Inquiry be officially recalled and an audit conducted of its fact-finding process.

Furthermore, we request that a thorough and independent evaluation of the security situation in the DRC for UN colleagues be conducted and that appropriate mitigation measures for any identified risks be implemented without delay. This should include a review of how the security management system in DRC is monitored to ensure compliance.

We wish to remind you that CCISUA has repeatedly brought our concerns on the setup of the current security system, including the integrity of its senior officials, to your attention and we call for your immediate action in restoring a proper security regime that best ensures the safety of our colleagues.

We would also like to remind you that since 2013 CCISUA has been questioning the independence of the current Board of Inquiry system, whereby the organization investigates itself, and has been calling for an independent mechanism to investigate deaths in service. The fact that the Board of Inquiry was chaired by a former head of the Department of Safety and Security only reinforces our concerns.

In closing, we trust that you will continue in your efforts to ensure the well-being of all UN employees and look forward to hearing from you on what efforts you will take to re-establish a credible safety and security framework that puts the protection of UN colleagues as its top priority and ensures independence and full accountability in its investigative processes.

Yours sincerely, on behalf of CCISUA

The letter can be accessed here.