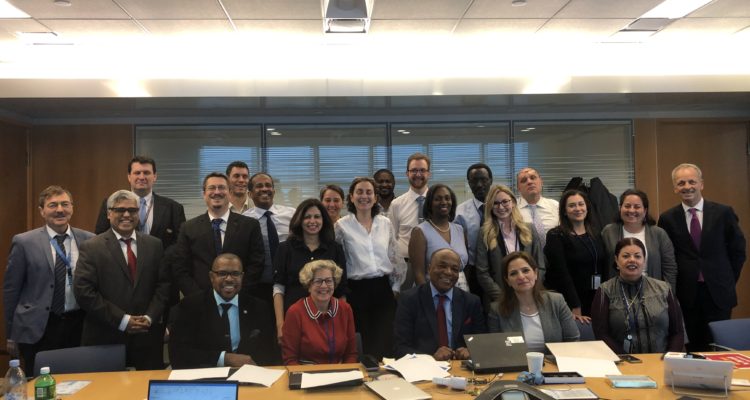 From 5 through 7 November, delegates from CCISUA member and observer member Staff Unions and Associations met in New York, USA, for the CCISUA mid-term meeting, hosted by the UN Staff Union in New York.

CCISUA met with ICSC’s Executive Secretary, Ms Regina Pawlik; Chief of Human Resources Policies Division, Ms Henrietta De Beer; Chief of Salaries and Allowances Division, Mr. Yuri Orlov; and  Chief of Cost-of-Living Division, Mr. Ibrahim Yansaneh; and raised several concerns on post adjustment, compensation for locally recruited staff, parental leave and the consultative process with staff.  Particularly, the members highlighted the issue of the current double post-adjustment multipliers established for colleagues in the professional category in Geneva and resulting discrepancies in take-home salary and how this poses a threat to the compensation element of the UN common system. As noted in a letter from the staff federations to the ICSC Chairman, the ILO-AT reversed the decision of Geneva-based organizations under its jurisdiction to implement the ICSC’s 2016 cost of living survey, which had led to a pay-cut of 5.2 percent. For Geneva-based colleagues under the UNDT/UNAT jurisdiction, no ruling has been passed yet.

Regarding the consultative process with staff, CCISUA members expressed disappointment as the commitments made by representatives of the ICSC at contact group meetings with staff federations were not taken on board by the ICSC Commissioners during the ICSC summer session.

Concerning the issue of interpretation of the ICSC statutes, related to its mandate of directly implementing Post Adjustment Rates, the ICSC representatives stated that a resolution is expected from the member states to clarify the way forward. As to the consultative process, a meeting dedicated to this topic will take place in February 2020 with all 15 ICSC Commissioners present.

Earlier this year, CCISUA endorsed the call from the Heads of UNICEF, UN WOMEN, UNDP and UNFPA for better parental leave and childcare.  During the meeting with the ICSC representatives, the members reaffirmed their support for the call and enquired about the progress made. The ICSC representatives informed that the ICSC Secretariat conducted a comprehensive review on parental leave, presented during the ICSC summer session, and that the working group will meet in May 2020 to continue the work and decide on a proposal, which will then be presented at the ICSC summer session in 2020.

On management strategy and personnel matters:

CCISUA met with Under-Secretary-General for Management Strategy, Policy, Compliance, Ms Catherine Pollard, and Assistant Secretary-General for Human Resources Management, Ms Marta Helena Lopez. The members shared concerns on the lack of clarity about contract reforms as discussed during the 38th session of the High Level Committee on Management (HLCM). They stressed the problems caused by “flexible”/consultancy contracts, which pose a direct risk to the sustainability of the Pension Fund and After Service Health Insurance, lead to more instability and loss of institutional knowledge as positions are abolished, and turn the Organization into an unattractive employer. The members also highlighted the need to strengthen whistleblower and sexual harassment policies, as well as the oversight mechanism to ensure that nobody is immune when committing misconduct.

With respect to the UN reform, the members cautioned about the lack of social dialogue in the process and stressed the importance of staff participation in the discussions. On Global Service Delivery Model (GSDM), the members stressed the instability and constant insecurity experienced by the affected staff, who fear losing their jobs, while no clear information is provided on whether the GSDM will be implemented.

Ms Pollard noted that contract reforms are still being reviewed and will be part of the work of the task forces looking at contractual framework under HLCM. She agreed that international civil servants need independence to perform their tasks and that the noted reform is not about cutting benefits – a good social benefits package will be maintained. Ms Lopez added that with respect to accountability, the Office of Internal Oversight Services (OIOS) has a separate section dealing with senior management cases and that the cases must be investigated from a neutral perspective,  which takes time and progress is not immediately visible due to strict confidentiality requirements. On GSDM, Ms Pollard clarified that a decision is awaited from the member states.

On disabilities in the workplace:

CCISUA met with Mr. Gopal Mitra, UNDIS focal point at the Executive Office of the Secretary General, to discuss progress on the UN disability inclusion strategy. The members cautioned about the overly rapid implementation of the strategy, which may affect the quality of implementation, and noted that adequate time must be given to ensure correct implementation as well as that benchmarks should be established to move forward and keep track of real progress. It was further noted that the UN common system employs a very small number of staff with disabilities – the members enquired how this situation can be improved.

Mr. Mitra agreed that a mid-term and long-term plans are necessary to implement the strategy, which includes realistic benchmarks and progress tracking. Regarding the number of staff with disability employed, he noted that reasonable accommodation is necessary to address the issue, which sometimes translates into high expenditures and can be seen as unattractive by managers. One of the solutions, as seen in UNICEF, is to establish a fund for reasonable accommodation, to cater for the whole organization. He added that it is necessary to see disability as part of diversity and of “leave no one behind” objective of the 2030 Agenda and SDGs.

The report of the CCISUA mid-term will follow in due course.